Your web browser is out of date. Update your browser for more security, speed and the best experience on this site.

Weekend To Do: Culture Club 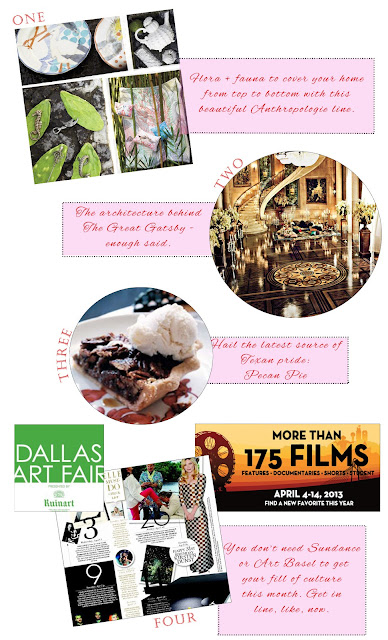 One: Anthropologie's home collection, inspired by remote isles and sea, is the perfect addition to freshen up tablescapes and homes this season. It's the escapism that will get you from Spring to Summer.
Two: We can't event begin to cover how will feel about the genius of Baz Luhrmann in one blog post. While everyone is certainly looking forward to the release of The Great Gatsby, Architectural Digest is digging into the design and architecture of the set with Tobey Maguire. Read it here.
Three: Texas has officially named the pecan pie THE state pie. In a state known for sweets and Southern hospitality, this is no easy feat. Food & Wine shares the 1996 winning recipe for Bobby Lee's Texas State Fair pecan pie (judged by none other than Dean Fearing). Just add it as another source of Texas pride, along with BBQ, breakfast tacos, and sweet tea. Recipe here.
Four: The Dallas Art Fair (April 12-14) and The Dallas Film Festival (April 4-14) bring serious talent to our growing cultural mecca. Get your tickets and read about the art and film waiting to blow your mind this month.